The Making of an Emmy Win 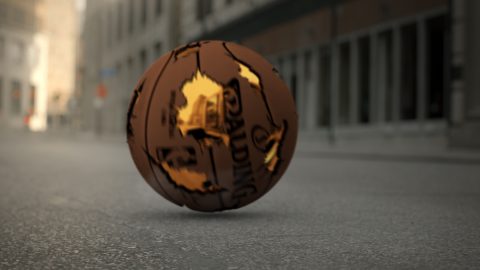 The Making of an Emmy Win

A lot of excitement came along with the Emmy win for our “Rings” video commemorating the Cavs 2016 NBA Championship title. A special feeling came with taking home one of those coveted gold statues for a piece of work that showcased such a historic event in the city of Cleveland.

But before “Rings” became an Emmy-winner, a lot of hard work was poured into the careful creation and execution of the video that was unlike anything we have really done before. Two of our Think Media editors, Chris Wiegand and Thom Schwartzhoff, are the creators of the 3D and motion graphic elements that made the final product so spectacular to watch.

Throughout the “Rings” video, there are a number of scenes that show a basketball bouncing through downtown Cleveland with pieces of the ball breaking off each time it hits the ground. The concept of the pieces breaking off were to reveal the shiny, gold Larry O’Brien trophy underneath. In order to create this type of effect, our editors had to make a 3D basketball that was an exact replica of an official NBA game ball. This was only one facet of the editing process that made this video what it is. 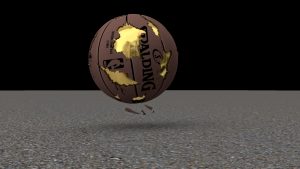 Chris explained that they went to certain key areas around downtown Cleveland and shot background plates and reference video on a type of camera called an ARRI ALEXA where they bounced the ball in the shot so they could recreate the lighting and motion of the ball movement in CG. At each location, they used a 360° camera to make HDRI spherical maps of the environment.

After getting these shots with the ALEXA and creating spherical maps of the environment, Chris then designed the CG basketball animations including the pieces of the ball flying off when it hit the ground. He used the 360° HDR maps in 3D to light the scene and also as a reflection map so that the environment of each location would show up in the reflective gold material that was being revealed.

Thom then took the 3D renders to composite together. He added subtle details to the composite like additional effects to add dirt particles from the ball impact and adjusted the background plates and 3D renders so they blended together realistically. He also added depth of field effects and did the final color corrections on the scenes to match the other non-CG shots. 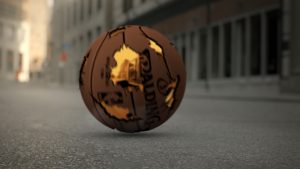 After working so hard to create such careful details and additions to this video concept Chris says, “I think the most groundbreaking aspect of this project was the ability to quickly create the 360° spherical maps… We are fortunate enough to already own the camera we needed for the maps and without it, we would have spent a long time taking photos and stitching them together in post-production”.

The technology advancements now available have made it possible to put out higher quality VFX on projects like this that we have never really done before. But after all is said and done, that is a part of what we love about our industry: the ability to use new technology to create award-winning stories for our clients.